To link with the Africa in Motion 2012 festival theme “Modern Africa”, we have invited papers from international scholars working in the field of African popular culture. The symposium will cover various aspects of contemporary African arts and cultures from different parts of the continent, including music, visual arts, fiction, dance, film and festivals. Current research in African popular culture illuminates Africa’s position in a global world, where new and modified cultural forms that embrace modernity and reinterpret tradition, are emerging all over the continent. The digital revolution has also had a profound impact on African popular arts, where artists and audiences alike now have unprecedented access to create and consume new art forms. The day will conclude with a roundtable discussion on the popular African video-film industries. Having originated in Nigeria in the 1990s to become widely known as “Nollywood”, the phenomenon of low-budget filmmaking with easily accessible digital technology that aids production and consumption, has created a revolution in African filmmaking. This model is increasingly being adopted in other parts of the continent and the discussion will look at this phenomenon from trans- and international perspectives. A number of video-films will also be screened during AiM 2012, and a seminar on Nollywood is taking place on Wed 31 Oct, also at the University of Edinburgh.

The symposium is kindly co-hosted by the Centre of African Studies at the University of Edinburgh.

To attend the symposium, please return the completed registration form (Word / PDF) and cheque (made payable to Africa in Motion Film Festival Ltd), to Africa in Motion Film Festival, Out of the Blue Drill Hall, 30-36 Dalmeny Street, Edinburgh, EH6 8RH or by email to: [email protected] by 15 October 2012. Admission is priced at £15 (£10 Students). Please note you could also pay by cash or cheque on the day of the symposium (but please register in advance).

The above programme is also available to download: Word / PDF.

The deadline for registration is 20 October 2012, but book early to avoid disappointment.

If you are interested in AiM's 2012 Symposium, see Onookome Okome's Seminar, 'Do Nollywood Film's Matter?', Brigit Meyer's Seminar, 'Video-Movies, Spirits and the Popular Imagination in Ghana', and African Popular Arts Documentaries on Thur 1 Nov at 10am. 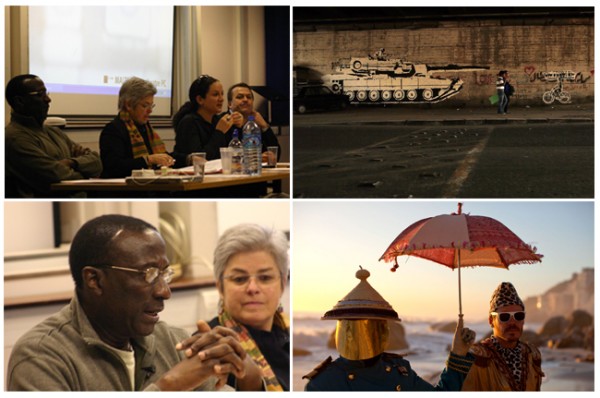