It comes as no surprise that African animation has gone largely unnoticed, with its history and development undocumented, sometimes resulting in the misplaced notion that it does not exist. However, African animation has a history that is at times as old as European animation, with its earliest animations dating back to 1916 in South Africa, the 1930s in Egypt and the 1950s in the Democratic Republic of the Congo.

As is true of animation worldwide, animation in Africa does not only exist in the realm of children’s entertainment, but also acts as a document of local narrative and myth, political criticism and social commentary. The animation programme for Africa in Motion aims to position African animation within these discourses, presenting a diverse collection of works, from its earliest forms to the more contemporary 3D computer-generated animations being developed by young ‘up-and-coming’ graphic artists and cartoonists.

The work presented stems from a variety of African countries: Niger, DRC, Kenya, Uganda, Tanzania, Egypt, Ghana, South Africa, Nigeria, Senegal, Zimbabwe and others. Whether artistic or commercial, they offer the viewer the opportunity to dispel the notion that perhaps African animation is primitive in its form or lacking the production values of its American or European equivalent. At times we can see evidence of the influences as far off as Japanese Manga Anime, but the work still retains a strong sense of the unique identity that drives it.

The programme showcases some of the earlier work, such as that of Moustapha Alassane from Niger, cited as the father of Sub-Saharan animation who made Bon Voyage Sim (1966), a charming satirical account of the pomp and grandeur of African politicians post-independence.

Also screening are a collection of films by Jean Michel Kibushi from the DRC who presents the viewer with a diversity of aesthetics, techniques, and narratives, at times sombre and reflective, at times a celebration of local myth riddled with Congolese humour. The animated hand-drawn documentary, Kinshasa Septembre Noir (1992), for example, makes use of rudimentary materials such as chalk-on-paper, which due to the political environment at the time was the only way to document the military pillaging that was occurring in Kinshasa. Kibushi’s work also promotes aspects of his culture through local myths and narratives that stem from his childhood, whilst drawing from popular artistic practices such as those of Congolese popular painting and local theatre and dance. This is evidenced in his stop-motion film, Prince Loseno (2004), and cutout animations Muana Mboka (1999) and Le Crapaud Chez ses Beaux Parents (The Toad who Visits his In-Laws, 1991). 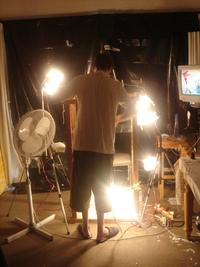 Although both Alassane and Kibushi are fundamentally auteurs and tend to work independently of an industrial incentive, this is not always the case. There is evidence of young animators in Kenya that are funding their own work through commissioned projects in the advertising industry such as the talented Peter Mute, Alfred Muchilwa, Moses Wanjuki and Kwame Nyongo and Gado featured in the programme. These practitioners began as cartoonists, fine artists, painters and graphic designers. They all participated in UNESCO’s Africa Animated! project in 2003 that aimed at encouraging and empowering young artists with the skills and knowledge to produce their own short animations. The Africa Animated! project ran for three years and included participants from East Central, South and West African countries. In most cases the participants stemmed from varying practices and had no previous knowledge of animation. Educational shorts were produced with a view to broadcast across various African countries. A collection of these shorts will also be screened.

Perhaps the greatest success story of the growth and development of both the commercial sector and independent filmmaking circuit can be seen in South Africa. Animation in South Africa has been used to address local issues, such as HIV/AIDS, with the case of the commercially driven and locally broadcast Takalani Sesame Series (Sesame Street Africa) introducing the first HIV positive character, Kami. The more sensitive topical issue of the rape of a young infant was tackled in the animation And There in the Dust (2005) by DOproductions, which is included in the program for Africa in Motion. Here the directors used a combination of pixilation and stopmotion, with strong visual metaphors to address this otherwise difficult to depict theme. South Africa also has produced some wonderful independent shorts shown at Africa in Motion, such as the experimental work of fine artist Tessa Comrie, and the comedic political satirical skits of cartoonist Mike Scott. 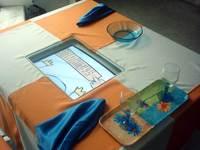 Also featuring will be the work of some talented graduates from Helwan University of Cairo, Minia University, and independent filmmakers from the Cinema Institute, Cairo. The work showcases the variety of aesthetics and skills whilst being technically very accomplished. These animations will screen alongside the artist Mohammed Ghazala’s 2D digital animation Hm Hm (2005), meaning `hungry’. Besides being a practising prolific animator, Ghazala also lectures in the Animation Department of the Fine Arts Faculty of the University of Minia. The department attracts students from all over Egypt to study animation and is considered one of the first animation departments in universities in the Arab world. The film Hm Hm was part of a video installation for the Youth Salon festival 2005 in Cairo where it was awarded a prize for the video art section. It is intended to be viewed in a gallery setting projected on a screen facing upwards, placed as if the top of a set table in a restaurant. Its production process included loose drawings on the computer using rudimentary technology, drawing with the mouse rather than a graphics tablet. This gives the work an experimental loose and erratic movement that is well suited to the humorous theme.

Across the continent there is evidence of a growing community of animators and there is much to be said about the impact of digital technologies on the sudden appearance of African animation in the European circuit. Perhaps the internet has to some extent democratised the dissemination of this work that can now be viewed online, for those young African animators that have access to these technologies. With animation groups and forums popping up everyday, African animators are beginning to discuss and disseminate ideas about their own work and the specific problems they face. For this reason, the inclusion of animation as part of the Africa in Motion programme could not be more timely. African animation, it would seem, is at the cusp of a new and exciting period and deserves the attention of a wider audience to recognise its efforts and accomplishments. It is within this climate that Africa in Motion seeks to promote the work of these artists, and frame and contextualise it within its specific social, cultural and political contexts, providing a platform for wider discussion on the future of animation in Africa.